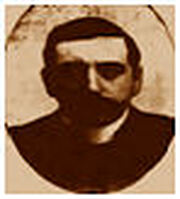 There has been a church in Uphall since around 1150. This became the established Church of Scotland, however, in addition, both Uphall Free Church(based in Broxburn) and Broxburn United Presbyterian Church sent missionaries to Uphall. They were missionaries, students or probationers and the experience gained in Uphall was built on, as they later served God in their individual callings. In return, Uphall gained from their enthusiasm, dedication and hard work. Our congregation should remember the missionaries, the men who did the "spade work" to plant our congregation.
What happened to the men who served our community? Where did their service take them?

Before the opening of the Mission Hall in 1894

James Paul Alexander, son of James Alexander and Janet Borthwick, was born 16 October 1868 at Leslie, Fife, Scotland. He was educated at Edinburgh University and Trinity College, Glasgow.
The 1891 census records Mr Alexander, age 22, Boarder, Student of Theology, living at Broadyetts Cottage, Uphall.
After serving as an assistant at Uphall Free Church(Broxburn) and Wellington Church, Glasgow,  Mr Alexander was inducted to Blackfriars Church, Jedburgh in 1903. He then became the minister of the united congregation when Blackfriars joined with Boston Church in 1917, celebrating his semi jubilee in 1928. He married Alice Cunningham in 1904 and they had one daughter, Margaret Joan, in 1906..
Mr Alexander was very active in the community, serving on Roxburgh Council Education Committee and the County Library Committee. He was the Bruce Lecturer in Trinity College, Glasgow in 1933 and published his lectures under the title " A Priest For Ever".
Mr Alexander resigned due to ill health and passed away, aged 72 years,  on 27 February 1941 at Boston Blackfriar's Manse, Jedburgh.

James Burt, son of Henry Burt, Linen Weaver, and Margaret Thoms was born  1832 at Kirkcaldy, Fife. No information is recorded about his education. He married Catherine Gerratt on 1 January 1856. Mr Burt completed his apprenticeship as a blacksmith and was first recorded as a missionary in Dunfermline in 1877.  He then moved to Cadder, Lanarkshire.
The 1881 census records Mr Burt, age 48,  Home Missionary, U.P. Church, living at Auchencairn Road, Cadder, Lanarkshire.

A minute extract from Broxburn U.P. Church shows Mr Burt was appointed as "Evangelist to Broxburn, Uphall and Westerton on 3 October 1882".  After negotiations regarding a meeting place, he started meetings in Uphall School on 1 April 1883 and, by the end of the year, there were 50 - 60 people attending. The Band of Hope had 57 people attending.
Valuation Rolls record the family living in a house in Uphall in 1883, no address is given. Interestingly, on 30 July 1884, The Falkirk Herald, reported that an action was heard at the Small Debt Court at Linlithgow against James Burt, Missionary. He and his family had been living in a house where the rent was to be £10 per year if a wash house and washing sink were included. As that did not happen, Mr Burt paid £8 per year. The action was taken as Mr Burt did not pay £10. The sheriff acquitted Mr Burt and awarded 10/- expenses.
The family then moved to Fairley's Buildings, Church Street, Broxburn(1885, 1886). At the time of his wife's death in 1887, the family was living in Main Street, Broxburn. One of his sons, also named James, married Lizzie Ritchie from Kirkliston and they lived in Broxburn, where he was the Reading Room Hall keeper, until 1920s.
Unfortunately we have no record of what happened to James Burt after March 1889.

George William Stevenson Cowie, son of George Cowie, Mercantile Cashier, and Jessie Millar Gray, was born on 14 September, 1869 at Airdrie, Lanarkshire. He was baptised at Free High Church, Airdrie two days later.
At the time of his marriage to Jessie Brydon Murdoch on 30 July, 1895, his residence was Millbank, Uphall.
Mr Cowie was educated at Glasgow University, then the Presbyterian Hall, Edinburgh. Licensed by Glasgow U.P. Presbytery on 28 June 1898, he was appointed assistant to Rev Dr Steel, minister of Greenhead U.P. Church. and was ordained 8 March 1900. He was called to the charge of Buchlyvie, Stirling in 1901 and ministered there until his retirement in 1931. 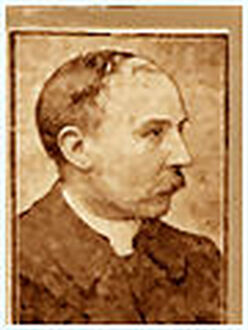 For many years he was clerk to the Free Church Presbytery of Stirling and Dunblane.
He passed away at the home of his daughter, Christine, and son in law, Rev J.T. Stewart, Townhill Church, Dunfermline, on 12 September 1936.

William Forbes, son of William Forbes, Shoemaker, and Christina Milne was born on 26 April 1864 at Aberdeen.
1891 census records him living at The Lodge, Uphall as a lodger, his occupation being  "Assistant Minister Broxburn United Presbyterian Church".
He married Jemima Law on 10 December 1896 at East Mains, Broxburn.  Jemima was the daughter of James Law, Farmer at East Mains, and Agnes Black.  They had three sons.
Mr Forbes was ordained and inducted to Cairneyhill U. P. Church, Fife, on 16 October 1895, with a stipend from the people of £90, with the manse.
Mr Forbes was active in the community, serving as a member of Fife Education Committee and as a Justice of the Peace. He also served as joint clerk of Dunfermline and Kinross Presbytery.
He was minister at Cairneyhill for over 40 years and passed away at a Dunfermline Nursing Home on 2 June 1943 at the age of 79. He was buried at Torryburn Cemetery, Fife.

John Haggart, son of James Haggart and Ann Robertson, was born on 13 April 1859 at Callander, Perthshire, where he attended the Free Church School. He continued his education at Edinburgh University and New College. During his student days, he came to Broxburn to do mission work. Licensed by the Presbytery of Edinburgh in 1894, he became assistant at Ladyloan Free Church, Arbroath. He was ordained and inducted to Methlick Free Church,
Aberdeenshire on 9 January 1896. At Methlick, Mr Haggart introduced instrumental music, the organist being his wife. He was held in esteem as a highly gifted preacher and sympathetic pastor. Mr Haggart left Methlick for Alyth, Perthshire in 1908 and served as moderator of Blairgowrie Presbytery.
He married Kate Grainger in 1896 and had one daughter
He passed away on 10 July 1943, aged 84 years, at Guildford, Surrey, the home of his daughter.

John Muckersie, son of George Muckersie, Linen Weaver,  and Jane Thaw  was born on 4 January, 1849 and baptised on 12 February 1849 at Ceres, Fife.
After serving his apprenticeship as a joiner at Cupar, he moved to Edinburgh and married Margaret Wilkinson on 1 January 1878.
The 1881 census records him living at 3 Orwell Place, Edinburgh, his occupation being "Joiner, also Student of Arts, Edinburgh University". Evidence that he carried on working as a joiner, in addition to studying for the ministry.
He served as Assistant Minister at Uphall Free Church(Broxburn) and later accepted a call to the Presbyterian Church, Belize, British Honduras, arriving there in April 1889. Whilst at Belize, his son William George was born and then sadly his wife passed away. After several years in this charge, Mr Muckersie  resigned on 30 January 1903 and moved to the USA and then, in 1910, to Canada.
He married a further two times: Sarah Walsh, who predeceased him, and Lilly Jamieson.
He died on 22 February, 1935, age 86 years, at his home in Atherley, Canada. Interestingly, his obituary notes he used to lead Gaelic services there. He was buried on 25 February 1935 at Orillia, Canada.

William Craig Young, son of Hugh Young, Upholsterer, and Janet Craig was born 19 March 1861 at Largs, Ayrshire.
He was educated at Glasgow University.
Our records show Mr Young was appointed to conduct services every alternate Sunday and gave a report on 16 December 1889. He was called to Crail, Fife, on 29 April 1890. On 24 June, 1890 he was ordained and inducted at Crail, the stipend from the people being £108, with the manse. After being called to Tayport in 1907, he resigned twelve years later, and spent his time preaching in different parts of the country.
He passed away, aged 67 years, on 18 May 1928 at 1 Dalkeith Street, Portobello. His wife, Annie Campbell Maclean predeceased him. 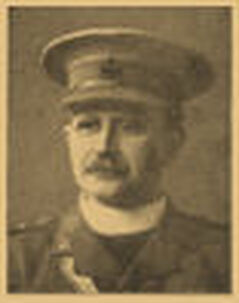 After the opening of the Mission Hall in 1894

Mr Alexander(see above) was missionary at the opening of the Mission Hall. He was followed by Rev Donald Stewart.

Rev Donald Stewart
Donald Stewart, son of Allan Stewart, Farmer, and was born on at Ardnamurchan, Argyll. The family then moved to a new farm near Neilston, Renfrewshire.
He studied at Glasgow University and then at New College. Licensed by the Presbytery of Renfrew on 28 June 1887, Mr Stewart took up his post at Uphall in June 1894. After leaving Uphall in 1897, his ministry was cut short by domestic reasons and he returned to farming. At the crisis of 1900, however, he found himself free from these personal responsibilities, and allied himself, early in 1904, with the Free Church. After a brief period as a supply preacher, he was on ordained to the Barony Congregation, Glasgow on 27 December 1905. From there he was called to Renton; and from Renton he was called to Aberfeldy.
He passed away on 20 November 1935 at Prestwick.

Throughout the years of mission, the Uphall Free Church(Broxburn) was in need of a meeting place. A donation was given to the erection of a hall and the Deacons' Court agreed to erect a place for meeting in Uphall Village.The Mission Hall, designed by Mr. James Graham Fairley, F.R.I.B.A., architect, India Buildings, Edinburgh, and was built on a piece of ground, owned and gifted by Sir John Pender M.P..The building cost about £500 and had seating for 250. There was a pretty stained glass window in the south end, a combination of cross and crown, with the first and last letters of the Greek alphabet on each side.The Mission Hall was opened on 7 Jan. 1894, the missionary then being Mr. Alexander. Two Sunday services were begun, a Sunday School, Bible Class, and Thursday night meeting.
On 4 April 1894, it was agreed to appoint a probationer instead of a missionary student to the Mission Hall and Rev Donald Stewart was appointed at a salary of £80 on 3 May 1894, with duties commencing 6 June 1894.  On 26 January, 1897, Uphall Mission was erected into a “Preaching Station” by the Free Presbytery of Linlithgow.

Missionary information shows Broxburn United Presbyterian Church was also carrying out mission work at Uphall.  The missionary had been meeting in Uphall School and the building of a meeting place was being considered. However,  a decision was taken to discontinue this Mission work, and to unite with Uphall Free Church.  This union was agreed at national, presbytery and local meetings of both churches. However, not everyone was happy! At a joint meeting of office bearers of both churches, it was suggested that the churches preached at Uphall on alternate Sundays. Rev. Donald Stewart voiced his concerns and asked for time to consider. He then decided he could not carry on in the post.

Next year, 1898, the General Assembly sanctioned Uphall as a full charge.  A unanimous call was given to Mr. Millar, and his ordination took place on  2nd Aug. 1898.  By that time the membership exceeded 100.

25 June 1895   UP Church at Broxburn handed over to Home Mission Committee of Presbytery. No more records of missionaries available.
Source: Minutes of Broxburn U.P. Church.

31 March 1897     Rev George Millar introduced and appointed to the Preaching Station. He was then ordained as our first minister on  2 August 1898  when Uphall was sanctioned as a full charge.